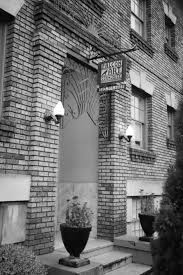 As the largest major city in the state of Oregon, Portland is an oasis of cool. Characterized by hiking trails, bike paths, and coffee shops, the city also boasts a thriving arts and culture scene. Art museums, galleries, and studios line every corner of the bustling city, and aspiring artists from all over travel to this cultural mecca in search of inspiration. Weirdly enough, a nondescript little apartment building on the corner of Albina Avenue and Killingsworth Court is home to one of the city’s premier art galleries.

The Falcon Art Community sits on the first floor of the Falcon Apartment building and features work from 25 local artists, “designed to provide a nurturing space for creativity and inspiration at every turn,” according to their website. And with so much creativity in the air, there’s no doubt the Falcon Art Community is a must-see. But if you decide to stop by the apartments to check out the local artists, keep your eyes peeled for more than just inspired artwork, as the building is said to be haunted by the ghosts of tenets past.

The genesis of the Falcon Art Community can be attributed to the efforts of one man: Brian Wannamaker. Although born in Canada, the wealthy real estate mogul has made Oregon his personal passion project. Portlandians know Wannamaker as the man who gentrified North Mississippi Ave in the early 2000s, singlehandedly transforming it from slum to chic. But of all his undertakings, Wannamaker seems to favor the Falcon above all else. Over the years, the Canadian real-estate developer has poured a near-obsessive level of time and money into it, and his investment is in large part what’s kept it afloat.

Generosity in patronizing the arts is not without its perks, as Wannamaker has the pleasure of personally selecting all 25 artists to feature at the Falcon, including painters, sculptors, musicians, and writers. Many of them not only display their work in the gallery on the building’s first floor but also live in apartments on the floor above, sometimes free of charge. Wannamaker’s interest in his artists’ careers extends beyond the Falcon, as their work is regularly displayed in other galleries around the North Mississippi area. The eccentrically generous Wannamaker has also been known to take his favored artists on outings to the Columbia River on his boat, and throw lavish parties in their honor.

The artists of the Falcon adore Wannamaker and revere him as the “Medici of Portland.” Due to his efforts, the Falcon has become a hub of creative expression and freedom, both financial and artistic. Wannamaker often doesn’t conform to contemporary trends in the art community, or their pressures of what’s considered “cool” or “in.” Instead, he cultivates his gallery based on his own personal taste, opting to uplift underground and unknown artists. Some of the artists he chooses even directly push back against popular trends through their work. Their paintings are usually large, intentionally absurd-looking oil on canvas works dangerously close to crossing the line between tact and tackiness. With only one good eye, perhaps this is simply what Wannamaker prefers.

Predating Wannamaker in the Falcon’s history is a mogul of a different sort, an Alaskan gold-rush tycoon named William P. Sinnott. After securing his fortune, Pinnott journeyed down south from Alaska to develop land in Oregon, and built the apartments in 1911 under the name The Peninsula. Sinnott owned and oversaw operations for a few years before moving on to other ventures. In 1922, the building suffered a massive fire, reducing most of the original structure to ashes. The Peninsula was no more.

Wanting to salvage their original investment, the new owners wasted no time in reconstructing the ruined building. After renovations were complete, the building was renamed and has been known as the Falcon Apartments ever since. But it wasn’t the last fire to ravage the Falcon. In 1994, a similar series of fires occurred in the building’s upper floors, causing significant damage. The apartments remained unoccupied until 1997 when the notorious Brian Wannamaker bought up the building and the Falcon Art Community was born.

Today, tenets of the building pay a small fee each month to support the local artists showcasing their work at the Falcon. Many of them are more than happy to do so, and even donate additional funds to the community every month. Although life at the Falcon comes with the added perk of a built-in art gallery and for some, free rent, the tenets living at the Falcon Apartment building in hipsterific Portland may have signed up for more than they bargained for.

For decades, rumors of ghostly sightings have circulated about the old building, including stories of an eternally helpful handyman and a grumpy tenet whose rest was rudely interrupted by the community of artists downstairs. Several of the artists themselves buy into these rumors, even drawing inspiration from the other side for new paintings. It just comes with the territory, they say, and it’s a small price to pay for free rent.

Phantoms at the Falcon

In a city as storied as Portland, and in a building as old as the Falcon, there’s bound to be a ghost story or two floating around, most of which predate Wannamaker’s artistic community. Among the more popular of these stories is the legend of Mr. Cooke, a handyman who lived and worked in the building for decades. In life, Mr. Cooke was said to be a polite, friendly guy, popular and well-liked by everyone at the Falcon. Whenever anyone had a maintenance issue, needed an odd job done, or just a helping hand, Mr. Cooke was there. One of Mr. Cooke’s primary duties was to repair the mailboxes, which were old and in a constant state of disrepair. After many dedicated years of service, Mr. Cooke passed away peacefully in his apartment. But the Falcon hadn’t seen the last of him. Perhaps because he spent so much time there, the apparition of an older man believed to be Mr. Cooke has often been spotted around the mailboxes, particularly whenever they’re in need of repairs. The boxes themselves have also been known to rattle inexplicably.

Along with the mailboxes, the residents have spotted the ghostly figure of the old handyman in the room that used to be his maintenance office. One member of the Falcon Art Community swears he saw the spectral form of an old man in a baseball hat and glasses sitting in a chair inside the office. But when he peered inside for a closer look, the figure had vanished. This incident is far from the only run-in the live-in artists have had with Mr. Cooke. Some of them claim to have noticed their work tools missing or moved. A few of the missing items include hammers, nails, and tape measures, prompting some to believe that perhaps the deceased handyman needed them for a maintenance project. Some of the artists who work late into the night finishing up projects even claim to have witnessed certain objects sliding off the table and crashing to the floor! Whatever the reason, the considerate Mr. Cooke usually remembers to put things back where he found them.

Another ghost rumored to haunt the Falcon doesn’t seem to have warmed up to the artists as quickly as his friend. A former tenant of the building known only as “Jimmy” is rumored to lurk through the halls as well. Similar to Mr. Cooke, Jimmy is described as an older man, although much more unkempt and frightening than his clean-cut counterpart. While Mr. Cooke is shorter, Jimmy is tall, over 6 feet, with wild hair sticking out in all directions. He is typically spotted shuffling about in his slippers, dressed in a dingy blue bathrobe.  His appearance perfectly matches his character as the quintessential grumpy old neighbor stereotype. He seems to resent the community of artists living downstairs, or perhaps he’s just jealous of their free apartments. Jimmy takes his frustrations out on the art community by slamming doors, dropping temperatures, and throwing pictures off the walls.

However they may feel about the artists, the two seem to share a close relationship to one another, according to reports. Residents and artists have often seen the ghostly pair standing together, usually in the upstairs hallway after dark. The artists sometimes draw doodles of the pair, Mr. Cooke in his baseball hat and Jimmy with his crazy white hair and blue bathrobe.

The Falcon Art Community is home to some of the most gifted artists in the city, according to Brian Wannamaker at least. And according to those artists, they share studio space with some friends, or foes, from the other side. So whether you’re in the mood to pursue a local art gallery or possibly to witness some paranormal activity, the haunted Falcon Apartments on Albina Avenue are a must-see.