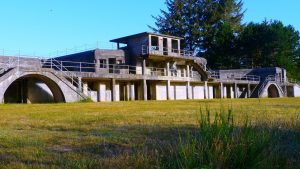 The sprawling city of Portland sits on the Columbia and Willamette rivers beneath the watchful eye of Mount Hood. Known as the original hipster kingdom, the city is characterized by its coffeehouses, microbreweries, and man-buns. Portland is also the largest, most populated city in the state of Oregon. And in a city that size, there truly is something for everyone, from the world’s largest indie bookstore to black magic-inspired donuts.

Just a two-hour drive from the hippie capital of the world sits quiet little Clatsop county, which Battery Russell, Fort Stevens calls home. Standing outside the dilapidated old buildings, it’s easy to forget how close the city, and the modern world, really are. The place exudes an eerie, almost palpable air from its every pore, almost as if the buildings are breathing. And as the wind rushes through their hollow frames, it’s easy to see why the place is rumored to harbor the ghosts of America’s bloodiest wars.

Join us as we take a walk through time, beginning at the Civil War all the way through World War II, and every ghost in between. Hundreds of brave men fought to protect the shores of Oregon from foreign threats, and their ghosts are believed to remain behind, perhaps unaware their fight has long ago ended.

Related: Why Fort Stevens is one of Oregon’s best state parks

In 1863, as the Civil War ravaged on, the fort began construction to serve as guardian to Oregon’s exposed south shore. Originally dubbed Fort at Point Adams, Fort Stevens was renamed in honor of former Washington governor Isaac Stevens, who was killed on the battlefield. But before the fort could be completed the Civil War drew to a close, and the encampment remained unmanned for two decades.

In 1884, the Army Corps Engineers used the fort as a base while they completed construction on the nearby Columbia River Channel. Then another decade of inactivity passed Fort Stevens until 1896 when the Army began to see the value of Fort Stevens for coastal defense purposes. Concrete gun installations known as Battery Russel were added to modernize and fortify the base. Construction was finalized in 1904.

Although it stood at the ready, Fort Stevens did not actually see warfare until World War II. The fort was activated in the summer of 1941, and not long after experienced the unfortunate distinction of being the first stateside installation to suffer an attack from enemy fire since the War of 1812.

In June 1941, the Japanese submarine 1-25 fired 17 shells at Battery Russell. Yet the shots did no damage to the fort, partially because the commander had ordered a blackout. Thinking quickly, the commander also refused his men’s request to return fire, knowing that it would reveal the fort’s exact position to the Japanese. The massive submarine was also just out of range of Battery Russell’s guns. Luckily, the enemy sunk back into the sea without inflicting any damage to Fort Stevens.

The emplacements of Battery Russell, as well as the original buildings of Fort Stevens, remain on the premises in good condition. All of the old guns and cannons from wars past have long since been removed, but the buildings are still open to the public.

Today the surrounding area is home to a popular Oregon state park and enjoys a spot on the National Register of Historic Places. Visitors wanting to tour the area can walk through the buildings, the museum, and Civil War-era reconstructions of earth ramparts.

Teaming with history as well as local wildlife, Fort Stevens is a great place to take a relaxing hike and learn more about our nation’s history. But if you decide to go camping in the area, keep an eye out for a piece of this history that may still linger. Visitors to the area have reported seeing men dressed in WWII-era military uniforms, and strange glowing orbs of light near the fort.

Even though no casualties were recorded at Fort Stevens, hikers and other tourists have reported paranormal activity and unexplained events in the area. Some paranormal experts believe that a person’s spirit isn’t always tethered to the exact place where they died and that some are actually drawn to places that held emotional significance for them in life. Others believe that a person’s soul, trapped between worlds for whatever reason, is free to roam wherever they please. Whatever the case, restless spirits seem to be drawn to Fort Stevens.

One group of campers stopped to pitch their tents near the fort one summer evening. Even before night fell, members of the group began to feel uneasy, as if someone or something were watching them. Deciding to ignore their gut feeling, the group finished setting up their campground, made their dinner, and crawled into their tents to sleep. But that night was to be a long and restless one. Just as campers were beginning to drift off to sleep, the sound of gravel crunching under boots jolted them awake. One of the campers reports an inexplicable, eerie feeling as if all the hairs on the back of his neck stood right up. Unsure of what to do, the group remained silent inside their tent as the boots paced back and forth outside.

Soon enough, whoever it was left, and the terrified group of campers eventually managed to fall asleep. The next morning, the campers ventured out of their tents to check for boot prints in the dirt. The ones they found were unlike any they had ever seen before. Confused and thoroughly creeped out, the group decided to skip the hike they had planned for that morning and head straight back for their car instead. They made it safely inside, but just as they were driving away, one of them looked back to see the figure of a tall man dressed in a WWII-era military uniform, watching them. His frame grew smaller and smaller in the car’s back windshield until finally, he disappeared.

Another tourist to the area reports walking down the craggy shore not far from Fort Stevens in the early evening. It was chilly out, so he had the beach mostly to himself. As he walked along, he could see the figure of a man approaching. The man appeared to be wearing clothing of a deep army green color, and the man remembers thinking that he carried himself in a stiff, almost regal manner.

As the two men got closer to one another, the tourist could begin to make out the details of the man’s strange clothing. The man did in fact appear to be wearing a military uniform, but one of a distant, timeworn war. The two passed one another, each nodding in polite acknowledgment. Almost immediately after he had passed, the tourist turned his head to get another look at the mysterious man, only to find he had vanished entirely.

Confused, he glanced up and down the beach, but the man was nowhere to be found. Had he imagined it? The man even ran up and down the shore and stopped inside every hotel looking for the strange man he had seen, but to no avail. Determined to find an answer, he went back to his own hotel, where he remembered seeing a book dedicated to soldiers who manned the base during the Bombardment of Fort Stevens. Frantically, he flipped through the black and white photographs. And then he found it. There, looking back at him from the pages of the book, was the man he had just seen on the beach, dressed in his WWII military uniform. The man couldn’t believe his eyes. But it was definitely the same man, exactly the same age he was in the picture. It seems the long-dead commander just wanted to enjoy a quiet walk along the beach.

The souls of his fellow soldiers don’t always appear quite as conspicuously. Many hikers and other visitors to haunted Fort Stevens report spotting strange, glowing orbs drifting around the military encampment. Paranormal enthusiasts believe these to be the souls of the soldiers who defended Fort Stevens appearing in their purest form. On clear nights when the moon is full, some visitors claim to have seen as many incandescent orbs as there are stars in the sky. It seems the spirits of the men who served at Fort Stevens feel eternally drawn to it. Perhaps their shared sense of comradery and victory keeps them coming back.

Today, Fort Stevens stands as a living relic to the wars that built it, a timeworn testament to America’s relentless spirit. Although it wasn’t the site of any bloody battles, Fort Stevens remains an important piece of military history and holds a special place as the Defender of the Great River of the West. So if you find yourself in Portland and need a break from hipsterville, consider taking a drive to Fort Stevens. The soldiers out there get lonely sometimes, with only the overgrown moss creeping over the encampment and the wind in the trees as company.