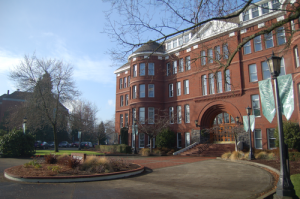 The city of Portland, Oregon is a thriving cultural and artistic hub bursting with art galleries, coffee shops, and bookstores. Its citizens too, are cultured, sophisticated, and environmentally conscious. But Portland would be nothing without its many great universities, where young Portlandians go to learn the basics of recycling and espresso-making. The University of Portland, in particular, practically funds the city’s economy, with an annual economic impact of $170 million, while also contributing over 13,000 alumni to the city’s population. As a private Catholic university, the school is fairly small, with a student body of about 4,200. Despite its smaller size, the university offers a wide variety of programs and majors including business, engineering, nursing, education, and even a small graduate program. But even scarier than the massive amounts of homework and essay-writing that comes with any liberal arts degree, the haunted University of Portland is rumored to be inhabited by both students and faculty alike.

Since its founding in 1901, the University of Portland has watched its home city transform from a small port town to the massive, bustling city it is today. Located in the quiet University Park neighborhood, the campus itself maintains a portion of the city’s original northwestern sense of serenity. The large red brick buildings, tree-lined paths, and fortress-like turrets emanate a traditional, collegiate air and sense of sophistication. Wandering down one of these paths, it’s easy to forget the campus’s proximity to the city. The college is positioned on Waud’s Bluff overlooking the winding Willamette River, providing a stunning view for stressed-out students to peer out over as they reflect on all their over-due assignments.

Before UP was established, it was predated on Waud’s Bluff by Portland University, another Christian college established by the Methodist Episcopal Church in 1891. Not even lasting a full four years, the school was relocated to East Portland following the economic crisis of 1983. According to campus legend, the defunct buildings of the former Portland University were actually what sparked the University of Portland’s establishment. The head of the Portland Archdiocese, Archbishop Alexander Christie, spotted the picturesque buildings positioned along the bluff, and was astounded to hear they no longer housed any classes. Something had to be done about that, so the Archbishop purchased West Hall and the rest of the disused campus with a little help from the Congregation of Holy Cross. The Archbishop named the new institute Columbia University in honor of the neighboring Columbia River.

In September of 1901, the newly minted Columbia University convened for its first classes. Since women wouldn’t be allowed to attend the university for another 50 years, the student body consisted of 52 male students, and eight Catholic priests as their professors. Classes were small, enabling professors to devote special attention and one-on-one instruction to their students. Small classes and individual instruction have remained core tenets of the University today, with an average student-professor ratio of 12:1.

By the end of the 1920s, the university had added a college of arts and science, and the first seven bachelor’s degrees had been awarded. By the 1930s, the university had taken on a new name: The University of Portland. The next several decades brought in the School of Engineering, the graduate program, and the School of Education. By 1951, women were permitted to apply. At the tail end of the 60s, what was once Multnomah College was absorbed into the University of Portland, expanding the school’s influence both regionally and academically.

While still a relatively small university, UP boasts a graduation rate of 81%. In 2021, The U.S. News & World Report ranked UP as the number two “regional university,” and placed it third in best undergraduate teaching. Not so impressive, however, is the school’s track record of tragic deaths, inevitably resulting in rumors of restless ghosts doomed to roam its halls.

If you take a walk through campus and follow the path down to the Commons, perhaps stopping to the stunning view of the Willamette, your peaceful stroll may be interrupted by the ramblings of a crazed old man. “Curse you old black crows,” the cranky old ghost of Frank Houston has been known to shout at the university priests.

Back in the early 1900s, Frank was said to have owned the land the Commons was built on and refused to sell to the University unless they gave in to his remarkably high asking price of $30,000. A staunch protestant, Frank despised the idea of his lands servicing a bunch of heretical Catholics. Declining to give in to his demands, the University opted to wait it out. This decision paid off, and after Frank’s death, his wife sold the land to UP for the much more reasonable price of $9,000.

Apparently not too happy his wife had gone against his wishes, Frank almost immediately began stirring up trouble. From the time the Commons opened in the 1950s, a number of strange happenings have been reported. A food service director reportedly quit after he heard footsteps following him down the hall, even when he was sure he was alone. His employees detailed similar stories, including dish carts moving on their own, pots and pans crashing to the ground, and food and silverware flying through the air. Others have even claimed to hear the voice of an angry old man yelling in their ear on the stairs.

Another food service manager tells an equally hair-raising tale. According to his report, he was working late one evening and was just about to call it a night, when he heard a strange rattling sound coming from somewhere down the hallway. The sound grew louder until suddenly an enormous stainless steel food cart came barreling down the hallway on its own, headed straight for him. He barely had enough time to duck into a nearby office before the cart went crashing by. Although not a believer in ghosts, the man admits it was pretty strange. Perhaps Frank was angry at the man for keeping him up late, or just for being Catholic.

Another spirit rumored to haunt the University halls is the younger and considerably less crabby spirit of a high school student named Paul Hillgens. His spirit is said to linger behind at Waldschmidt Hall, where he stayed during his time on campus in 1923. In those days, it was common for high schoolers to attend boarding school at the university, and on the first day the students arrived, it was tradition to take a dip in the Willamette River. Eager to follow this tradition, Paul and his friends ran down to the river as soon as they arrived. But that day on the water was to be his last, as Paul tragically drowned in the Willamette just hours after arriving.

Since his passing in 1923, students and professors have reported spotting the ghostly, dripping wet figure of a young man in an old-fashioned bathing suit and ball cap wandering down Waldschmidt Hall. Some professors have tried to chase after him to scold him for getting water all over the floor, but by the time they round the corner, the boy is gone, leaving only a dripping trail of footprints in his wake. Most witnesses who have seen the ghost of Paul Hilgens report feeling no malice or ill-will from him, unlike Frank.

But the most infamous of all UP’s ghosts is undoubtedly the little girl who haunts the Mago Hunt Theatre. According to students and faculty, her identity is unknown. Some believe her to be the spirit of a young girl who died in a fire years ago, while others think she’s more likely the daughter of a former professor. Whatever her origin may be, the ghostly little girl has certainly cemented her place within University lore. One drama professor claims she was teaching a class in the theatre one day when she noticed the figure of a young child peering out at her from the audience. Startled, she stopped mid-sentence to scan the crowd, but the girl had vanished.

The girl seems to make appearances backstage as well. The night before a big show, a doll’s dress was inexplicably found on top of a bucket of costumes. The dress was thin, papery, and yellowed with age. It looked like some kind of antique, reported witnesses. No one could explain how the dress got there, as there were no dolls featured in any of the theatre’s productions. Could it have belonged to the little girl?

Related: 10 Most Haunted Places in Portland

The University of Portland is a traditionally beautiful, quiet liberal arts college perfectly suited for the liberal town it calls home. With a stunning campus, breathtaking view of the river, and close proximity to the city, UP is the perfect destination for Portlandians seeking an education, or a run-in with the paranormal. From pissed-off protestants to creepy little ghost girls, you’re guaranteed to see something spooky at Portland’s premier Catholic University.