Hot Lake Hotel – One Of The Scariest Places In the World 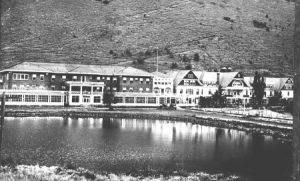 If you show up on an episode of a TV Show called: The Scariest Places in the World then you know, sooner rather than later, we are going to track you down, hogtie you and drag you kicking and screaming into our circus of freaks. That’s a USGHOST Adventure promise! We have a ravenous audience to appease, one that likes their ghost tales and macabre urban legends bloody and with a side of hot sauce. So, with that said, ladies and gentlemen, allow us to toss into the limelight the Hot Lake Hotel in Oregon. Stare gobsmacked at the decadent, tragic, fascinating, and utterly insane history of a joint with so many ghosts, demons, monsters, and boogeyman that it might as well be a potent concentrate of every American Horror Story season boiled up into one maddening episode.

Hot Lake Hotel, also known as Hot Lake Resort, is a less than quaint is historic Colonial Revival hotel built in 1864 in the area of Hot Lake, Union County, Oregon.

The Hotel was built in this far-away out of prying eyes locale on account of the thermal spring lakes that surround the property.

Fact-sheet on the hotel:

“When we were kids, we used to tell ghost stories, but as we’ve gotten older — I have friends who are scientific researchers, and I ask them questions. My mother has passed on. I choose to think she is in a wonderful, other place that we all will go. But I think that some people are trapped here… Well, these are the places that people have talked about for years, and years, that they go in, and you physically feel something is wrong. Some people do see things. Whether it’s in a mind, we don’t know.”

You can’t talk about the hotel without describing the hot springs and why crafty venture capitalists flocked all hot and bothered to that area to build a swanky hotel.

The hot springs that constitute Hot Lake themselves lay at the foot of a large hill. They were often used by Native Americans; not only because of their pseudo medicinal properties but because the Natives believed that they were holy places.

Hot Lake was one of the first thermal springs to be troubled by European settlers.

“Emerging from the chain of Blue Mountains, they descended upon a vast plain, almost a dead level, sixty miles in circumference, of excellent soil … In traversing this plain, they passed, close to the skirt of the hills, a great pool of water, three hundred yards in circumference, fed by a sulphur spring, about ten feet in diameter, boiling up in one corner. The place was much frequented by elk, which were found in considerable numbers in the adjacent mountains, and their horns, shed in the spring-time, were strewed in every direction around the pond.”

Washington Irving – on an expedition to the area. Yup, that same Irving, teh one of the headless horseman and Sleepy Hollow.

History of the Hotel

In 1864, Samuel Fitzgerald Newhart, a native of California, landed in the Grande Ronde Valley and started kicking dust around looking where to invest. Samuel, spurred on by tales of the water’s magical powers, constructed a wooden structure on the lake. The structure was a huge haberdashery, similar to a modern-day shopping mall; the place had a post office, blacksmith, dance hall, barbershop, bathhouse, and several other businesses.

By 1884, the Union Pacific Railroad started to edge its way north and began breaking ground near Newhart’s shopping emporium. In 1903, the original clapboard building was razed, and construction commenced on a new posh resort and several bathhouses.

Dr. Phy, the manager after Samuel died, became connected with the scheme in 1904, and a brick house designed for use as a hospital began construction.

By 1910, the hotel was racking in more than $178,811 in yearly revenue. And the upkeep was minimal, there was little overhead. Why? The geothermal heating system alone was saving the venture capitalists over $15,000 per year in heating costs.

In 1911, hands were greased and contracts were signed. The Central Railroad of Oregon became a silent partner to the hotel; the company built a 4-mile line from Richmond directly to the hotel.

The Hotel was bringing in the cash… and, now with a booming business, it was time to sell.

In 1917, Dr. W.T. Phy purchased the hotel and resort, for a staggering sum and renamed it “Hot Lake Sanitorium”. The man was a Freud and Jung aficionado with the vein a mad scientist; he wanted to uncover the mysteries of the mind. So, to put the whole quack affair into perspective: a “scientist” with easily available pharmaceutics – most shrinks and docs’ back then liked to raid their storerooms – sets up shop in a remote waystation – one which the natives though had spiritual qualities – in a hotel with a clandestine history – the hotel had a few skeletons, suicides and tales already pegged to its name – and starts to play god. Yup, perfectly natural, no need to worry about future Lovecraft inspired shenanigans.

The building became both a resort for the rich as well as a hospital for the ill. The doc’ and his staff dabbling in experimental procedures and oftentimes occult treatments.

By 1924, the hotel had converted into a major tourist magnet, drawing visitors worldwide. The Mayo brothers, founders of the Mayo Clinic, were regular guests to the hotel, as well as Wild Bill Hickok.

Dr. Phy, the central manager and part proprietor of the property, kicked the bucket in 1931 of pneumonia. 3 years later, on May 7, 1934, a fire consumed the bulk of the building’s west wing, effectively wrecking the wood constructions of the hotel. There were a couple of deaths that the board tried to hush up in the press.

From then on, business at the hotel sank, and, eventually, the hospital area on the third floor was the only functioning income revenue.

A flight school and nurse’s education hub was built at the hotel in 1939 during World War II.

In 1941, the estate was acquired by A.J. Roth, and was transformed into a nursing home, and when that wasn’t bringing in the dough, Roth sold part of the hotel to the state and created an insane asylum. If you know haunted spot tropes you’re sort of seeing a pattern by now, right? Some divine deity somewhere marking off horror story cannons on a checklist.

“Naw, wait for it… I’m only getting started.”

In 1974 ownership once more changed hands and the building became a short-lived eatery and nightclub. By now, rumors were spreading… talk of ghosts, hellhounds in the premise, bodies laying face down in the springs, people being molested by phantom hands, screams in the middle of the night.

The area was chock full of hauntings and then, a hand came down and ticked off a new box on that heavenly checklist I pointed out.

That’s right, the area became plagued by cult members, weird folks, and local vandals. By 1989, the bathhouses were in disarray and an RV park was operating adjacent to the hotel.

If you wanted to visit the area, you came with a rosary, an ax, a bottle of holy water, and a priest or two… and even with all that, you were still playing Russian Routleet with the forces of darkness, which tend to cheat when passing the gun around.

The building sat discarded and decrepit for over a fifteen-year period.

The area haunted by vacationers, a gardener who committed suicide, and residents who lived in the building during its use as an insane asylum. There’s even talk of ghostly piano music coming from the third floor. Robert E. Lee‘s wife, which visited teh hotel often, would often bring with her a piano.

There are reports of screaming, crying, dark figures running amok, the old hospital’s surgery room plagued by the smell of feces and the scent of iron.

Blood appearing on the walls. Chairs moving of their own accord. Things slithering under the water in nearby ponds. You name it, the hotel has it.

For more macabre tales and hauntings, check out our blog.