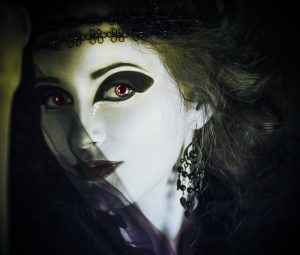 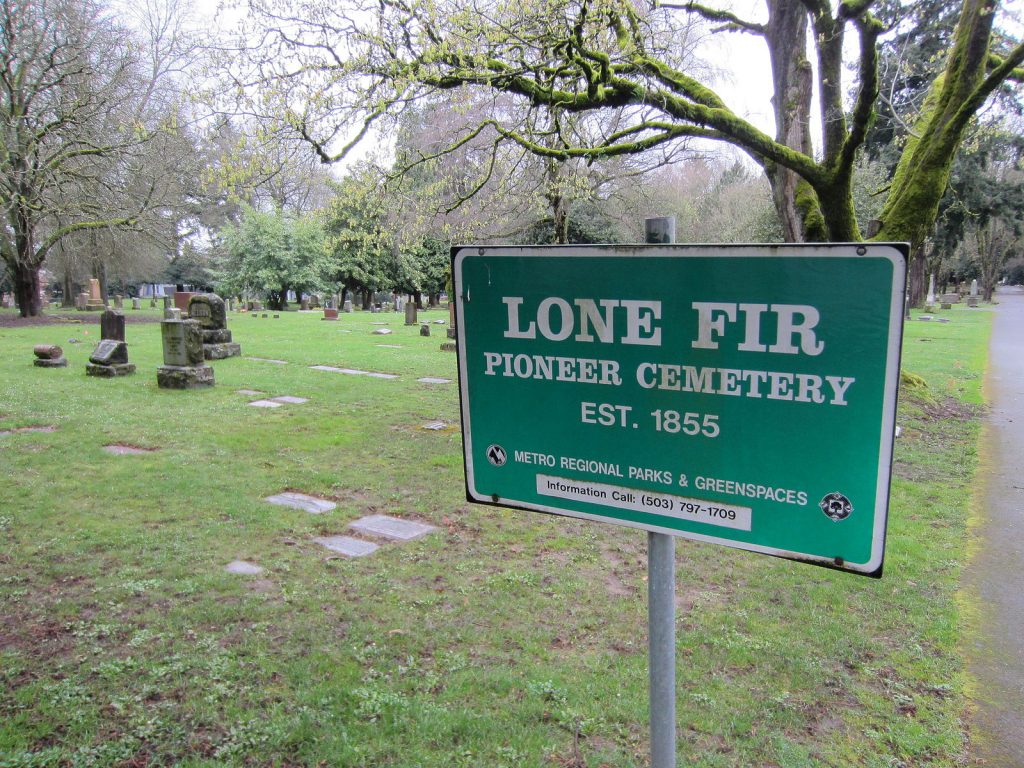 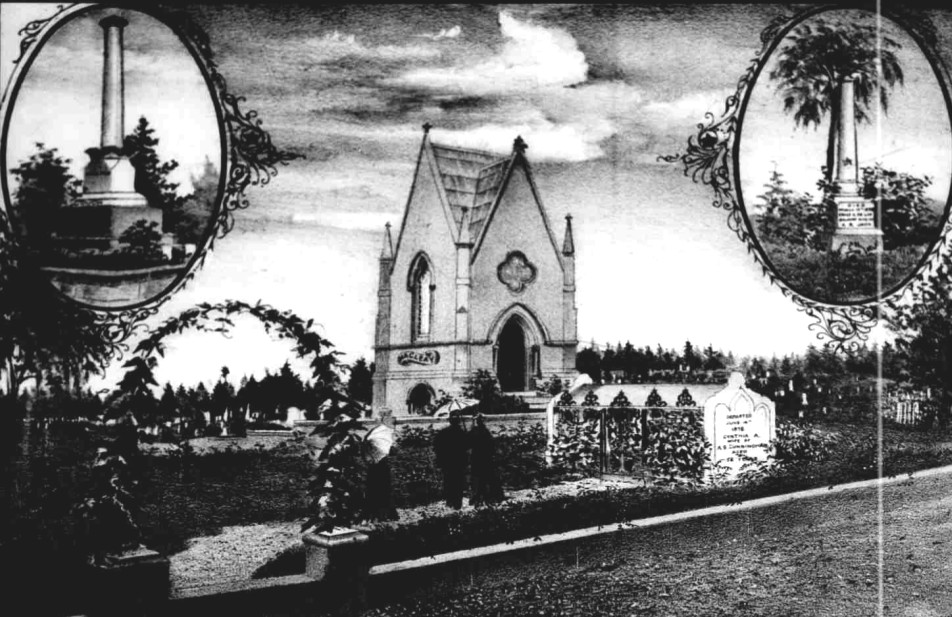 Lone Fir Pioneer Cemetery Portland, Oregon 1880s
Image Source: Wikimedia Commons
Coming in at number 10 on our list of haunted places in Portland is the Lone Fir Pioneer Cemetery. Located in Portland’s cool southeast section, Lone Fir has an eerie beauty about it. Lush trees and finely manicured grass frame the land during the summer months and beyond. Visitors walk through the natural beauty of the lands and experience the rich history of the cemetery. The first recorded grave dates back to 1846 before the land became established as a cemetery in 1855. Because of its old age, it is on the National Register of Historic Places in 2007. Within the cemetery’s thirty acres there are over 25,000 graves. Of which 10,000 are unidentifiable due to years and years of poor maintenance. Many graves house politicians, mayors, and famous people from Portland’s past. The cemetery’s first owner, James Stephens, purchased the land claim from the east bank of the Willamette River. In those days it was the Stephens family farm. Soon after the Stephens family built their farm, Emmor Stephens, James’ father, died. Emmor put his heart and soul into the land and his family couldn’t bear the thought of laying him to rest anywhere else. Eight years after Emmor’s untimely death, a steamboat owner by the name of Colburn Barrell made the Stephens family an offer they could not refuse. James Stephens accepted Barrell’s offer on the condition that his father’s grave continued to be maintained. Barrell accepted James Stephens’ terms and took over ownership of the land in 1854. 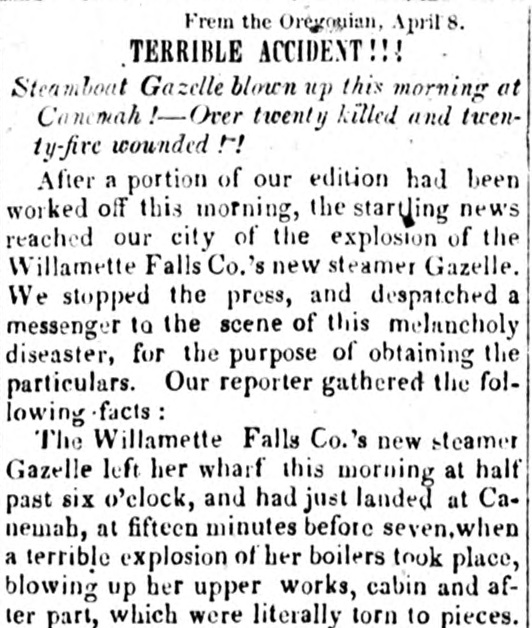 Unfortunately for Barrell, the steamboat Gazelle, which he and his partner Crawford Dobbins owned, exploded just outside Oregon City that same year. According to newspapers, workers began loading freight onto the Gazelle around seven o’clock in the morning. A little after seven, they heard a strange noise coming from the boiler room just before the vessel exploded– killing twenty-four people and injuring most of the remaining crew. Robert Hereford, the Gazelle’s captain, suffered broken bones as well as severe burns to the majority of his body. Many of the survivors suffered the same wounds, only a handful of people escaped the blaze unscathed. It is known as the worst steamboat accident in Oregon history. Barrell, feeling responsible for the accident, set aside ten acres near Emmor Stephens grave for the families of the passengers and crew. Barrell named the site Mt. Crawford to honor the memory of all those that died on that fateful day. 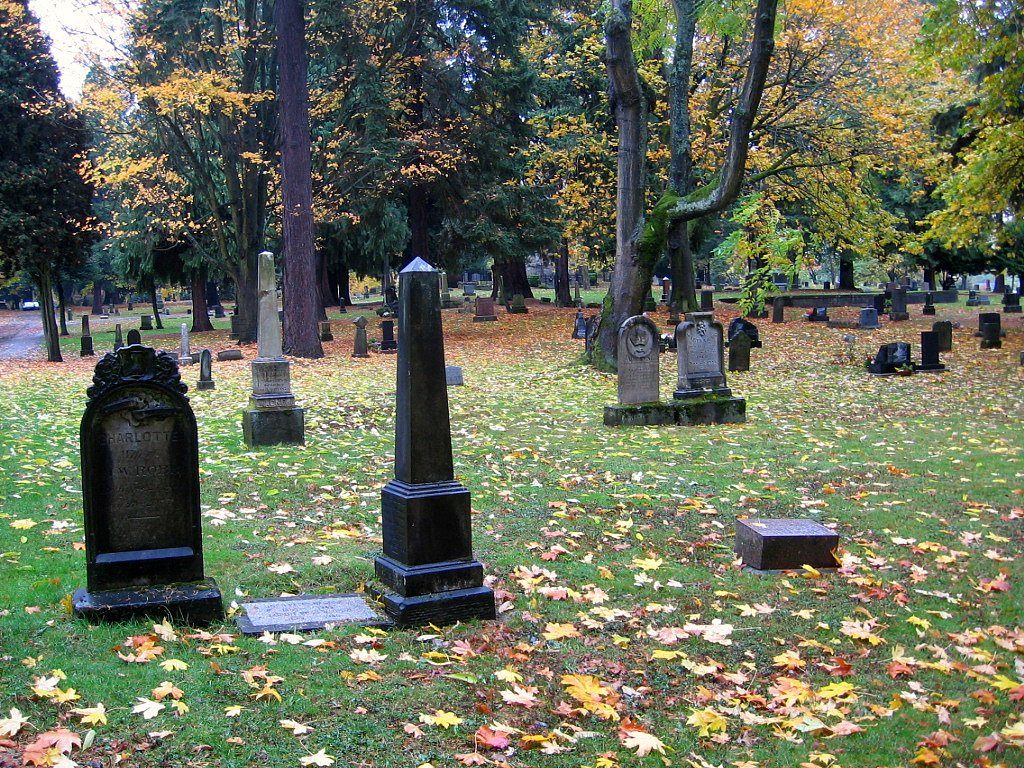 Colburn Barrell held on to the land for twelve years before he sold the cemetery to a group of Portland families and plot holders. Before they left, Aurelia, Colburn Barrell’s wife, suggested that the plot holders name the cemetery “Lone Fir” because there was a single fir tree on the property. After the Spanish-American War, the Mexican-American War, the Indian Wars, and the American Civil War, a Soldier’s Monument became a memorial for all those lost to war. The construction of the monument, funded completely by the five hundred citizens in the area, was completed in 1903. Almost fifty years later, the county made the decision to pave a large plot of land. This became the site of Chinese graves. The Chinese graves were moved over and over again and eventually built over. Originally, the county buried them in Lone Fir for a short time before they were shipped off to their home country. Some of the graves were forgotten or lost altogether. After which, a storage building was built over their graves. In 2004, an archaeological study found that at least two Chinese immigrants never went home. In 2007 the city removed the building and connected that portion of land with the rest of the grounds. On further study, the archaeological team discovered fifty more bodies. Worse still, these bodies were the mental patients from James Hawthorne’s Oregon Hospital for the Insane. Today, the area is sectioned off and visitors are aware of who is buried on the eastern edge of the cemetery. Lone Fir is found at SE 26th Ave & Stark Street and is currently open to the public. 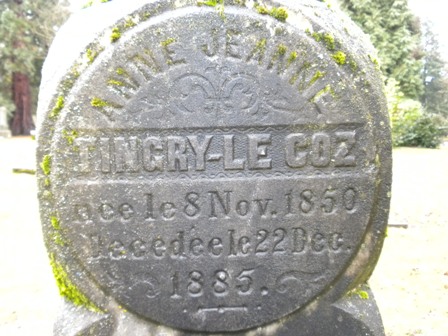 If you take a walk through the rows of headstones you might stumble upon the grave of a French courtesan. Anne Jeanne Tingry-LeCoz better known as Emma Merlotin was a thirty-five year old French courtesan. She was born on November 8, 1850, in France. She and her family immigrated to the United States when she was around five or six years old. She lived in a very upscale neighborhood with her husband for many years before he decided to run off with another woman to New York. This left Merlotin with no money to her name and no way to support herself. Rather than waiting around she decided to start her own business and became a high class prostitute. Becoming a prostitute worked well with the area because it was filled with upper class hotels and saloons. Early in the 1880s prostitution was not frowned upon like it is today. Working women could walk the streets without fear of social rebuke. Merlotin was not only famous for her incredible beauty but also for nabbing the wealthiest and most prominent customers in the area. She was very popular with women of all socioeconomic backgrounds. Merlotin would often hold garden parties at her home which were always the talk of the town. You can imagine how unfathomable it would be to the people who knew her that anyone would want to hurt her for any reason. But that is exactly what happened to her. Just before Christmas on December 22, 1885, Merlotin was brutally murdered in her cottage home at 3rd and Yamhill Streets. On that fateful night, it was raining and dreadfully cold, wrote the Oregonian. A police officer, tightening his jacket against the bitter winter wind, heard screaming coming from a nearby cottage. Upon entering the cottage the police officer saw the body of Emma Merlotin partially under her bed. Blood was everywhere, he reported, it looked as though she had been bludgeoned to death. Investigators examined the body and quickly realized that Merlotin had not been bludgeoned but brutally hacked to death with a hatchet. 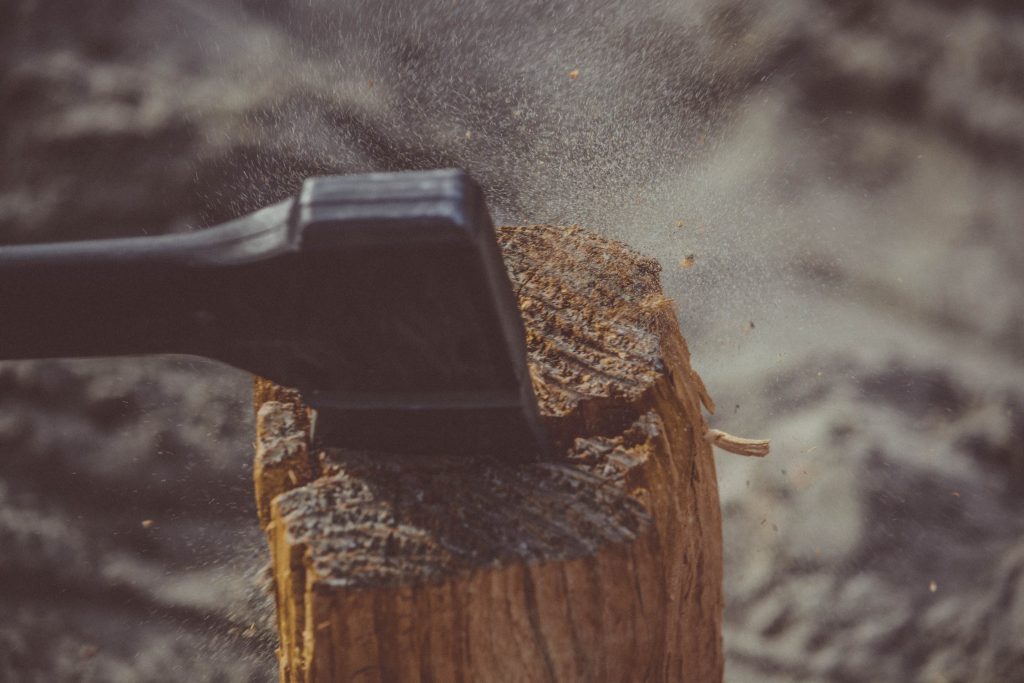 She had 12 wounds on her head and wounds on her arms. Clearly, investigators reported, she fought for her life with all she had. Later on, investigators spoke to a close friend of Merlotin, known only as Ameilia. Ameilia reported arriving home just after 11 pm. Around that time she heard Merlotin greet an individual in her rooms. She reported hearing male laughter and very soon after Merlotin began to scream. Immediately investigators thought it was a robbery gone bad. That maybe one of her clients decided he did not want to pay after all or that he knew a high class prostitute like Merlotin would have cash on hand. Very quickly Investigators realized this could not be the case. A gold ring with a signet setting was found next to Merlotin. She still wore her large golden earrings and sixteen dollars was on her nightstand. The ring, on closer inspection, even had a chip in it as if the murderer knocked it off her finger during the attack. If the murderer’s motive was indeed to rob Merlotin then why would he leave such precious valuables behind? Strangely, during the investigation two officers reported hearing some commotion coming from the back of the cottage. Peering out of the darkness the officers watched as three men circled the cottage looking for a way inside. One man stood out to the officers immediately because his face was badly scratched, as if by a woman’s fingernails. The officers pounced on the man and arrested him on the spot. William Sundstrom, the man they arrested, said he was curious about the crime that had taken place. When the officers inquired about the scratches on Sundstrom’s face he said he fell into a tree trunk. The officers knew full well Sundstrom was lying and made him take them to his home. Once there, they began to search for evidence. They did not have to look for long because a pair of blood stained pantaloons and a bloody hatchet were sitting right in plain view. Even with the evidence against Sundstom he wasn’t held for long. Apparently the bloody pants and hatchet weren’t enough to convict him, this lead to many people theorizing that it had to have been some sort of plot against the prostitutes in the area. In a last ditch effort to find her murderer investigators used a photography technique on Merlotin’s retina to see if the image of her murderer had been captured within them but to no avail. 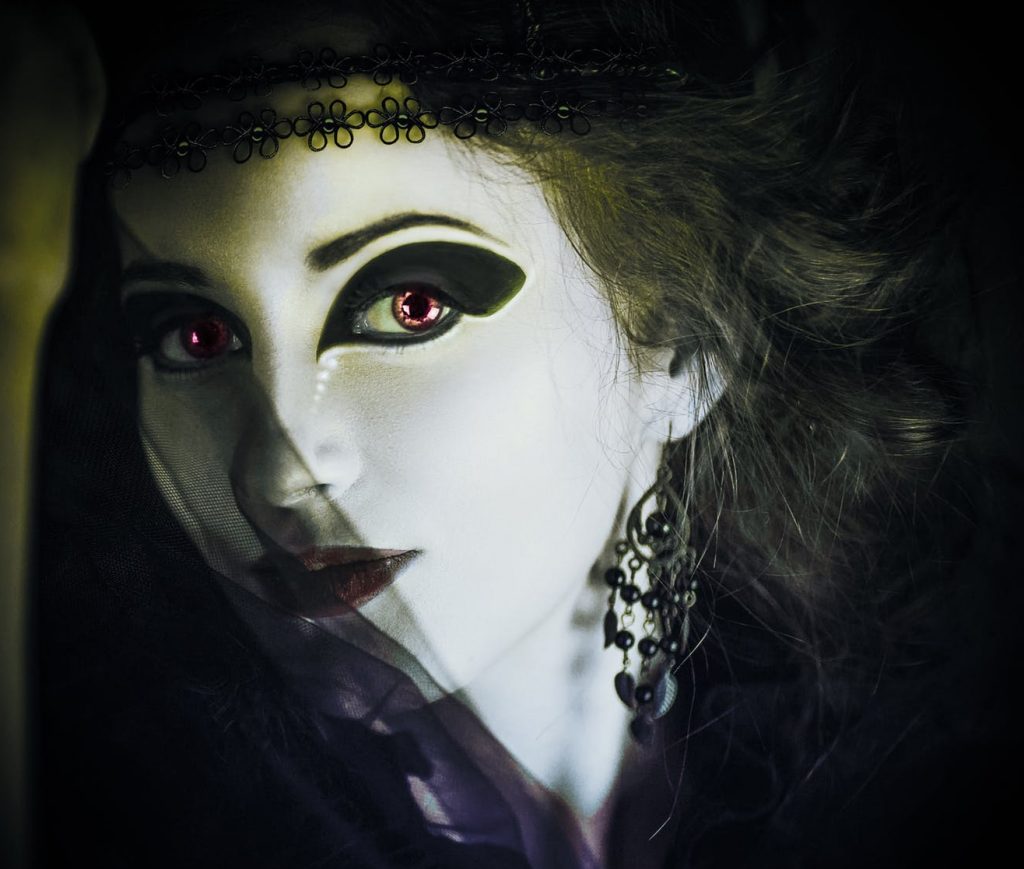 The beautiful French courtesan’s murder remains unsolved to this day. She may be dead but she is definitely not at rest. Many visitors report seeing a shadowy figure of a woman dressed in French fashion roaming about the cemetery. When she is approached she throws up her hands, screams, and disappears. Locals surmise that she is doomed to relive that horrible night when she lost her life for eternity. Be sure to visit Lone Fir cemetery, just make sure to keep your wits about you!