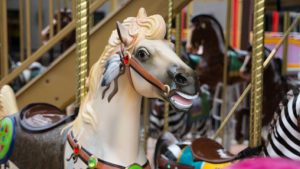 Few images in the American cultural zeitgeist evoke as unsettling a response as the carousel. Most of them are old, rusty, and verge dangerously close into uncanny valley territory. With their life-sized horses frozen in time complete with yellowed teeth and creepy glass eyes, t’s hard not to get skived out around them. Add in the image of undead ghost children and it’s game over. To lovers of all things paranormal, a haunted carousel may sound too good to be true, but the Jantzen Beach Carousel in Portland, Oregon fits this description to a tee: old, creepy, and extremely haunted. The carousel itself is no longer up and running, and its exact whereabouts remain unknown, so while you may not be able to take a ride on the haunted Jantzen Beach Carousel, paranormal enthusiasts are encouraged to pay a visit to Jantzen Beach to search for any lingering ghost children.

The Jantzen Beach Carousel’s origins extend all the way across the country to Abilene, Kansas. The carousel was commissioned in 1904 by wealthy ride manufacturer C.W. Parker, known by his contemporaries as the “amusement king” for his vast empire of amusement park rides and games. Along with the enormity of his empire, the King was also esteemed for his fine craftsmanship and the pristine quality of his carousels. After its completion, Parker transported the carousel to Missouri for the 1904 Louisiana Purchase Exposition, more colloquially known as the St. Louis World’s Fair. The fair was an extravagant affair, lasting from April to December and racking up a total bill of $15 million. Parker’s carousel quickly became a hot ticket item, especially among the younger Exposition attendees. The fair officially closed for business in December, but the rides were far from over.

After its stint in St. Louis, the carousel made a quick pit stop in Venice Beach, California in 1921, where it remained for the next several years. It wasn’t until 1928 that the carousel would finally settle in the destination that bears its name: Jantzen Beach Amusement Park. From the moment the ornate, beautifully crafted carousel was unveiled, it became a favorite with children from all over, and quickly became one of the park’s biggest draws. The carousel served its community proudly for decades until interest in antiquated pastimes like amusement parks and carousel rides began to wind down in the late 1950s. by 1960, most of the amusement park had closed, leaving only the carousel up and running.

In 1972, what was once the site of dilapidated rides and carnival games was cleared to make room for an indoor mall known as the Jantzen Beach Center, which remains on the former carnival site today. The center was briefly renamed to the Jantzen Beach Supercenter from 1996 to 2012, but has since reverted back to its original name.

So what became of the carousel? For the first half of the mall’s history, the large antique structure found a new home by the food court, and was adored by a new generation of Portland’s children. In 2012, the same year the Center stopped being super, the mall underwent a $50 million renovation, and the carousel was removed. According to the mall, it was moved to a storage unit somewhere on site.

Back in 1987, the carousel had been listed on the National Register of Historic Places, where it was joined by four other carousels. It was later bumped from the list in 2008 with designs for relocation to the Portland Children’s Museum. This plan, however, would never be, as the structure had also been designated as endangered by the Architectural Heritage Center. So rather than allow children to ride and enjoy it, the beautiful antique ride was stored away in some dark corner of the Jantzen Beach Center and hasn’t really seen the light of day since.

The rest of the carousel’s history gets a little fuzzy. In 2015, the mall released a statement assuring the public it was being safely stored in a security-monitored, climate-controlled facility somewhere on the premises. But in 2017, local newspaper The Oregonian contradicted this claim, reporting that the current location and owner of the carousel were unknown. The mall countered with a statement that the carousel had been sold to Kimco Realty, who in turn claimed their acquisition of the mall consisted of the building and surrounding land but excluded the carousel. Later that year, the truth was finally made public.  Apparently, the carousel had actually been donated to local nonprofit organization Restore Oregon, a transfer that had been kept under wraps until complete. Its exact location still remains a mystery.

Frustrating history aside, the Jantzen Beach Carousel is a gorgeous work of art. It features stunning, elaborate designs of ribbons and carved cherubs across its crown, making it appear almost like a fancy wedding cake. Hundreds of tiny sparkling lights illuminate its spinning surface, and intricately painted horses dangle from the dozens of golden poles suspended from its top. The carousel truly is a sight to behold; it’s too bad no one has ridden or even seen it for years.

Although the patrons of the Portland Children’s Museum never had the pleasure of riding the Jantzen Beach Carousel, rumor has it that a pair of ghostly children has stuck around for an eternal spin on their favorite old carnival ride.

Related: Whatever happened to the Jantzen Beach Carousel?

Though typically associated with family fun, the amusement park that the carousal once called home was marred by some not-so-fun happenings. By the time it closed in 1960, the colossal Jantzen Beach Amusement Park had been the site of several floods, a catastrophic fire, and an accidental death by roller coaster. Perhaps this less than fantastic track record prompted the first rumors of ghosts in the area.

As early as the 1950s, stories have circulated about the spectral forms of young children playing on the carousel. The ghosts were typically spotted by children themselves. Some were too scared to ride after seeing the pale faces of ghosts peering out at them, while others felt strangely drawn to the ghost children, and even tried to play with them.

The children are described as about six and eight, one girl and one boy, dressed in 1920s era clothing. Most sightings describe spotting the pair playing inside the machinery room at the carousel’s center whenever the door was left ajar. Though mostly reported by children to disbelieving adults, a few adults themselves have also spotted the apparitions, lending credibility to the eerie stories.

One particularly hair-raising report involves the experience of a young patron who rode the carousel just before the park closed for good. According to the now much older amusement park visitor, he was visiting the park with his parents and younger sister, who adored horses and begged her older brother to ride the carousel with her. After some convincing, he begrudgingly agreed. The brother and sister chose horses adjacent to one another, climbed aboard, and waited for the ride to begin. But something was wrong; the carousel wouldn’t start.

A maintenance man was quickly called to the scene to unlock the machinery room and figure out what was causing the holdup. Once the door was ajar, the young boy noticed something strange, a flurry of movement that no one else seemed to take notice of. He leaned off his painted wooden horse to get a closer look, and could hardly believe his eyes. Hidden within the inner wirings of the carousel, peering out at him through cold, gray eyes, were the spectral forms of two small children, dressed in strange clothing he didn’t recognize. But before he could say anything, the handyman stood up, shut the door, and hopped off the ride. Almost immediately, the carousel began to spin. Terrified, and not wanting to stay on for another second, the young boy tried to climb down from his horse. But the spinning motion of the ride caused him to lose his balance and fall. He swears up and down that just before he would have landed on the asphalt below, someone, or something, pulled him back up, saving his life. Could it have been the pair of ghostly children he had seen just moments before?

Over the years, the carousel has changed hands several times, with the reports of haunted happenings remaining consistent. Even the most skeptical of its owners have spotted the figures of children sitting atop the painted horses and heard their eerie laughter late at night. Some maintenance workers in charge of repairing the carousel have even threatened to quit, not wanting to further disturb the spirits. And although the exact location of the Jantzen Beach Carousel may not be known, one thing is for sure, this is one ride not for the faint of heart.