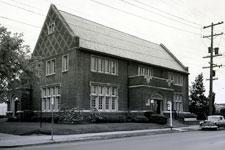 Before it was a library, the North Portland Library began as a small reading room in a little house on Albina Avenue. In May of 1909, the room officially opened and hosted a collection of over 500 books. Patrons from all over Portland were invited to come in and check it out. Check it out they did; In its first year alone, the small collection circulated nearly 4,000 times. In 1910, circulation reached over 15,000, nearly quadrupling in size. In this charming quote from the library’s annual report, the speaker notes the reading room’s incredible growth and perseverance: “It is hardly possible to make comparisons to show the growth at North Albina. From the day this reading room opened, it has been a matter of wonder that so much could be done in so tiny a place.”

By 1911, the reading room had expanded into a sub-branch of the Multnomah County Library, but due to its size, could not offer a complete list of reference services and programs granted at larger libraries. As their collection of books grew, so did the number of readers, making the Albina Avenue reading room due for an update.

In February of 1913, the library’s new location opened its doors to the public. The building was constructed in an attractive Jacobethan style, located on the corner of North Killingsworth Street and North Commercial Avenue. The central location gave patrons from all over access to a 150-seat meeting hall, a children’s reading room, and of course, lots more books. The assembly hall proved especially popular as well, hosting over 40 lectures in its first year alone. According to library records, the most popular of these was a course on municipal government, attended by over 2,000 people.

For the next several decades, the library prevailed as a pillar of its community. In the 1920s, nurses used the building as a well-baby clinic. During World War II, the Red Cross hosted sewing circles and held home nursing classes for women. High school students also used the library for late-night study sessions. The building was right next door to Jefferson High, making it a perfect after-school meeting spot. No matter the occasion, the Library was there to provide resources and support to the people of Portland.

Aside from community support, the library also expanded its collection to fit the needs of its community. In June of 1987, the library opened the Black Resource Center, a collection dedicated to recording and preserving the experience of Black Americans. The collection houses both academic papers and journals as well as popular fiction and has continued to expand to this day. Since the addition of the center, the library has continually shown its support for the black community. During Black History Month, the library holds an annual “read-in,” bringing together community leaders, teachers, and students to celebrate works by black authors, encompassing both fiction and non-fiction, and works for adults and children alike.

By the 90s, the library was in need of another update. By 1996, Portland had passed a $28 million measure to update technology and renovate the buildings of all Multnomah County libraries, North Portland Library included. The renovations included a new roof, upgraded plumbing, and a major update in the telecommunication department. To complete the project, an elevator was added for the accessibility of disabled library patrons.

Despite the considerable upgrade, the building’s original charm and character remain. When choosing new furniture and other decors during renovation, designers opted to highlight the building’s history rather than conform to contemporary trends. Although fresher and cleaner, the library still looks much the same as it did the day it opened in 1913, though it now boasts a whopping 30,000 volumes to its predecessor’s mere 500. The large, open layout and cavernous exposed-beam ceilings give the feeling of standing in a converted barn, and the soft, warm lighting adds to the library’s unique sense of charm and coziness. And according to Portland legend, the living aren’t the only ones who think so.

Almost since its inception, the North Portland Library has been a hotspot for paranormal activity. Spirits from all eras of the library’s long history are rumored to lurk within its walls, some of which have even been caught on tape!

With a history dating all the way back to 1913, it’s no surprise that the North Portland Library has no shortage of ghost stories. But the most famous and well-circulated of these is undoubtedly the story of the shadow man. Shortly after the building renovations were completed in 2000, the library installed a new security system complete with cameras and a control room. But rather than overdue library book offenders, the cameras caught something else entirely; something not of this world.

One cold, stormy evening in December, a pair of security guards sat laughing and joking around inside the security office, not paying much attention to the wall of black-and-white screens in front of them. The two were just about to step outside the office to grab a soda from the vending machine when something on the screen caught their eye. One of the guards peered closer at the screen and could make out what appeared to be the shadowy figure of a man sitting in a chair in the conference room on the second floor. Yet to the knowledge of both security guards, the conference room was empty. They later report feeling a strange, eerie sensation when looking at the dark figure through the screen.

Ignoring their gut feeling, the pair ventured up to the second floor to investigate. It was after six, so most of the building was dark and empty, and strange echoes reverberated through the halls. Thoroughly creeped out, the two guards reached for the door. To their surprise, it swung open to reveal an empty room. They stepped further inside to check under the table and in all the corners, but still found nothing. Eventually, the two made their way back upstairs. But when they reached the office, there was a surprise waiting for them: the shadowy figure had reappeared on the screen! Now terrified, the guards rushed back upstairs, but again found nothing. Later review of the tapes proved the guards’ eyes weren’t just playing tricks on them, but the shadow man was never seen again.

Another former employee of the library, Patrick Provant, recounts a similar but much more playful experience with the paranormal shortly after the shadow man incident. Ever the skeptic, Patrick hadn’t really believed any of the stories he’d heard about the library being haunted. Until he started experiencing them for himself, that is.

According to Patrick, the bathroom on the second floor of the library is haunted, and the ghost seems to favor one hand-dryer in particular. He reports that the dryer would turn on at random, seemingly of its own accord, often when he was using the bathroom. The malfunctioning dryer was reported to maintenance, and despite being “fixed” at least twice, continued to go off at random. After that, Patrick says he decided to play games with the spirit, and would ask to turn on the dryer. Either by coincidence or something unexplained, the dryer would usually turn on by itself whenever he used the bathroom. Patrick concedes it would have to be a pretty big coincidence.

One day, Patrick entered the bathroom during his lunch hour and, as usual, tried to encourage the ghost to turn on the dryer. After several attempts, the stubborn dryer remained silent. “I bet you a nickle you won’t turn on,” Patrick said aloud. Nothing. He sighed, then dried his hands and left the bathroom. When he returned to his table at the break room, a nickel sat waiting for him.

Patrick describes another incident in which a group of students from nearby Jefferson High School came into the library wanting to shoot footage for a school project on the paranormal. Patrick immediately took them to the upstairs bathroom. He opened the door and gestured to the hand dryer, “here’s the one that sometimes goes off by itself,” he said. As soon as the words left his lips, the dryer went off all on its own. Terrified, the group of students fled from the bathroom. At least they got what they came for!

The North Portland Library is a staple of Portland’s rich community and has provided resources, support, and of course books to Portlandia since 1913. The historic building offers a vast collection of books and periodicals for the avid reader, and if you’re a fan of the paranormal, potentially a ghost sighting or two. If not, steer clear of the second floor.