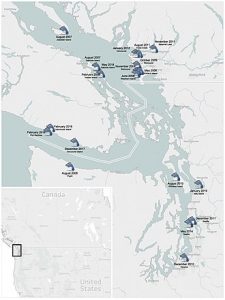 As far as creepy, weird, and downright bloodcurdling tales go, there’s not a single one more bizarre and utterly insane – at least in modern times – than the Salish Sea Feet Enigma.

Close your eyes, and let’s pretend. You’re walking the shores of British Columbia, the sun at your back, it’s sunset – the magic hour – and your shadow is growing smaller and smaller as night edges in. You’re at peace, the twilight colors – bright orange, blazing red, and deep blue – sparkles off the lapping waves. The sand digs into your heel pleasantly, the salt air is tangy but not intrusive. It’s lovely. The moon shines above, full and fat. The stars twinkle… it’s heaven… oh and a severed bloated foot has floated in and smacked your bare right toe. Your prism comes crashing down. It’s icky, a small crab crawls out the ragged cut edge – it’s pincers secured to the sawed-off bone. You jump back, bolt for your cellphone, ready to call in the boys in blue, when… GASP!… there’s another one a couple of meters off… and, bobbing in the waves, a third.

Well, this is the type of nightmare feed that has been plaguing the coasts of the Salish Sea since August 20, 2007. Dozens – at least 20 severed feet – have been discovered on the coasts of islands in British Columbia, Canada, and Washington, US.

The first leg – get the pun? – of this mystery started on August 20, 2007. The foot in question was found on Jedediah Island in British Columbia. Since then, feet have been uncovered on the coastline of islands in British Columbia, and in the US cities of Tacoma and Seattle.

The Canadian Coroners Service in British Columbia has been stumped by the weird flotsam. In most cases, foul play has been ruled out. Forensic authorities in most of the investigations determining that the feet came from people who were killed either in accidents or by suicide; the appendages detached during the normal process of decomposition. BUT, some, a small percentage, are a mystery unto themselves.

The feet were usually found in sneakers. The footwear gifting them with buoyancy and protecting them from the elements. Nike, Adidas, and all its many siblings instrumental in keeping them relatively intact.

“Even more important, and troubling, if viewed from the other end of the spectrum, is that the sneakers also allowed the feet to be spotted over a distance. Most sneakers are designed for such purposes, their colors contrasting with those of nature. We’ve only been able to retrieve feet wrapped up in these types of footwear. Imagine how many have been lost, or have passed under the radar? Feet clothed in leather. Feet bare or in flip-flops. Only a portion of the public wears sneakers… what about the rest?”

The mystery isn’t something new. Before the recent rush of feet coming ashore, there were earlier instances of such a phenomenon in the area. Eery events going back more than a century. In 1887, a leg was discovered inside a boot on the shores of Vancouver beach. In the mid-1920s, a swell of body parts was fished out near the mouth of the bay. During the 70s, over two dozen feet washed ashore in the area. The ebb and flow of the affair extremely creepy.

The most up to date, recent, discovery was on January 1st, 2019. A group of joggers on Jetty Island in Everett, Washington, phoned the police and reported a boot with a human foot inside. The coroner was able to match the appendage to a missing person’s case from December 2016; Antonio Neill.

The discoveries have been labeled “astounding” and “almost beyond explanation”. The fact that no other body part has turned up further frustrates the authorities and adds another level of bizarre intensity to the whole episode.

Over the years, people have sprung all sorts of wild theories around the feet.

One theory says that most feet may be those of people who have died in a boating accident, a shark attack or a plane crash. This theory in particular is backed up by the 2005 plane crash near Quadra Island; the 4 occupants’ bodies have not been recovered.

The second theory states that the area might be dealing with a serial killer. Although none of the feet show tool marks, some people believe that a madman is cutting up bodies and disposing of them in the sea.

The third theory lays the feet on the feet – get it? – of the mob. Gangland style killings. The feet the result of evidence decomposition.

Still another theory, there really are a lot, is that the feet belonged to folks who perished in the Asian tsunami on December 26, 2004. Richmond-based writer Shane Lambert has stated that a large quantity of the shoes were produced and sold in 2004 or earlier. Aside from the manufacturing dates, Shane has also investigated ocean currents. Research on the northward-traveling tendencies could have carried the feet up the Pacific Ocean; near the region hit by the 2004 tsunami.

The last theory, a paranormal one at that, states that most feet came from suicide victims; a fact supported by the identification of some of the feets’ proprietors… jumpers. Parapsychologists believe that the ghosts of these restless dead are the ones guiding the feet and anchoring them on the shores of the Salish Sea.

Coming up with an origin of the feet is aggravating to investigators because ocean currents may carry flotsam long distances; the currents, particularly those of the Strait of Georgia, are incredibly unpredictable. A body part, if caught in a current, may float as far as 1,000 miles (1,600 km).

And, as if that wasn’t enough, human feet tend to produce adipocere – a foamy soap-like substance formed from body fat. This substance throws a wrench on the workings of forensic scientists; the oily secretion makes finding clues near impossible.

Under optimal conditions, a human body may remain intact in the ocean for as long as three decades; the body parts may be from castoffs from the turn of the millennium, an epoch where analog ruled and digital interfaces – and cataloging – was a twinkle in some investigator’s eye.

Statistically, and here is where scientists perk up, the odds of finding a foot in the immeasurable immensity of the ocean is rather staggering. As in a needle in a haystack, if said haystack was the size of Texas, staggering. Mind-blowing. The odds of finding two feet are akin to multiplying that haystack’s size to the size of the United States. The odds of finding three… well, you get the idea. Now, add all that improbability to the fact that most feet where discovered in a relatively small region, in a relatively small timeframe. Mathematically it defies the norm. Hence why the enigma has long fueled the imagination of the public.

For more ghoulish tales and macabre mysteries, check out our blog.