The Top 10 Most Haunted Locations in Portland 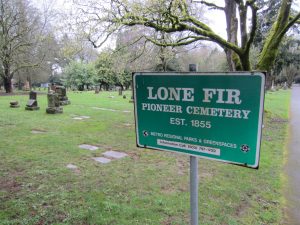 The Top 10 Most Haunted Locations in Portland

Portland got its start as a settlement that dates back to the 1830s, making it one of the oldest cities in the United States. Its proximity to the Willamette river made it an ideal location for a port. The river provided an ideal way to transport food, supplies, and workers which lead to the cities boom in popularity. Soon Portland’s economy was flourishing but its success made it a hub for organized crime. Today, Portland is a thriving, progressive boom town with an upbeat attitude. Portland is Oregon’s largest city, supporting a population of over 650,000, making Portland the United States 25th most populated city. The city sits on the Willamette river and has become known for its many bridges, which are now historic landmarks. Portland is well known for its love of the environment and supports over 10,000 acres of recreational parks and bike paths. The city’s warm summers and rainy winters provide the best climate for growing roses, which earned Portland the name “City of Roses.” Portland is a bumping, bustling city all year round! Interested in expressing your creative rebellious side? Look no further than Portlands thriving art and music scenes.

Planning a trip to Portland? This curated list of Portland hotspots combines the cities haunted past with its bold present. 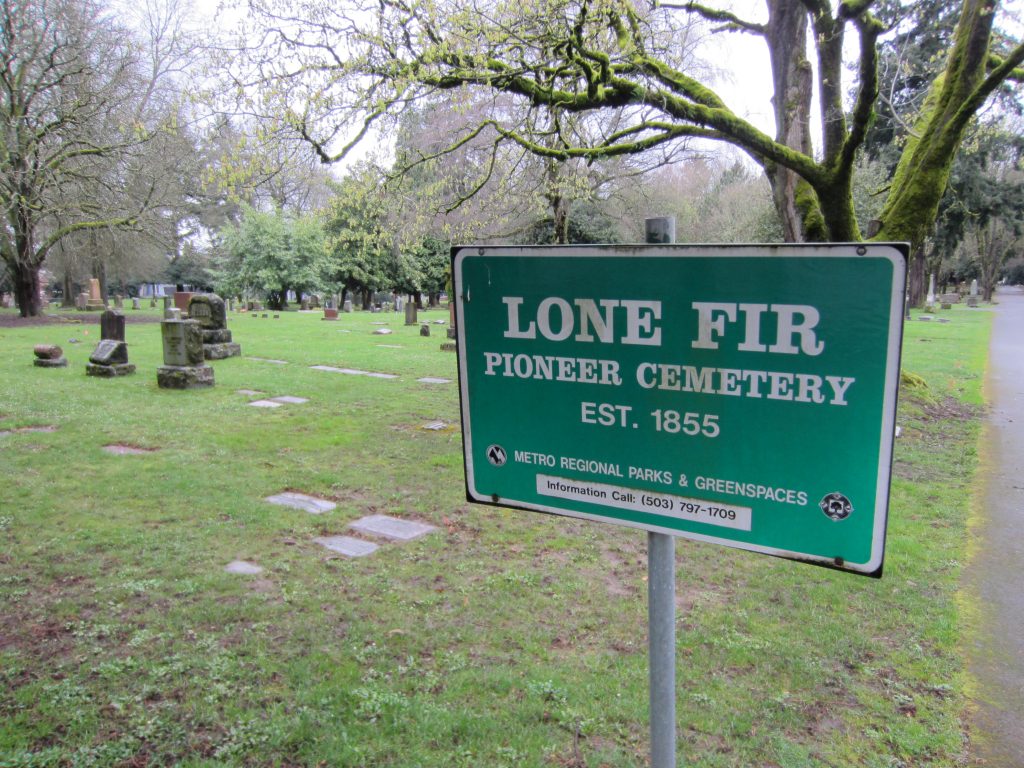 Lone Fir, established in the 1800s, is Portland’s oldest and largest pioneer cemetery. The oldest grave on the grounds dates back to 1846! Because of its age, it is listed on the National Register of Historic Places. This cemetery has seen over 25,000 burials, many of which have been politicians, mayors, and famous citizens like James C. Hawthorne– the founder of the first hospital in Oregon to house the insane. Lone Fir is also known for being one of Portland’s haunted hotspots. Visitors of the cemetery report hearing the sounds of a woman crying, especially at night. Others report hearing the sound of voices arguing but are unable to find anyone else on the grounds. When visiting the grounds at night be sure to bring a recorder along. Paranormal Investigators have recorded all sorts of strange sounds at Lone Fir…some of the sounds are still unexplained. 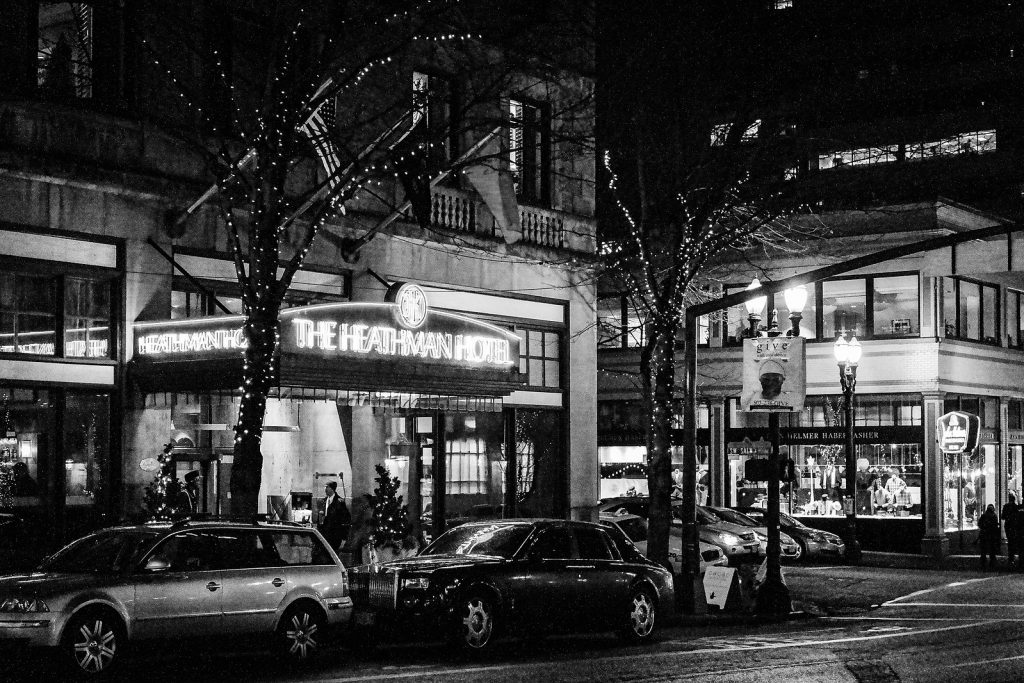 Nighttime view of the Heathman Hotel in Portland, Oregon

The Heathman Hotel, built in 1927, is one of Portland’s oldest remaining historical hotels. Along with the Imperial Hotel, Governor Hotel, and Benson Hotel, it is a member of the Historic Hotels of America and is listed on the National Register of Historic Places. The hotel was built, at the cost of $1 million, by George Heathman. Wealthy entrepreneurs, investors, and politicians hired Heathman to build a hotel that would represent their social status. The Heathman Hotel was built to be the definition of comfort and excellence. Standing at 11 stories tall and sporting 300 luxurious rooms it is safe to say that George Heathman did not disappoint his wealthy investors.

Even the most luxurious hotel has its ghost stories and the Heathman Hotel is no exception. According to local psychics, one of the guests committed suicide by jumping from one of the windows in the hotel. Visitors of the hotel who stay in rooms ending in 3 report strange sounds and voices. Booking a room at this hotel? Watch out for rooms with the number 3! 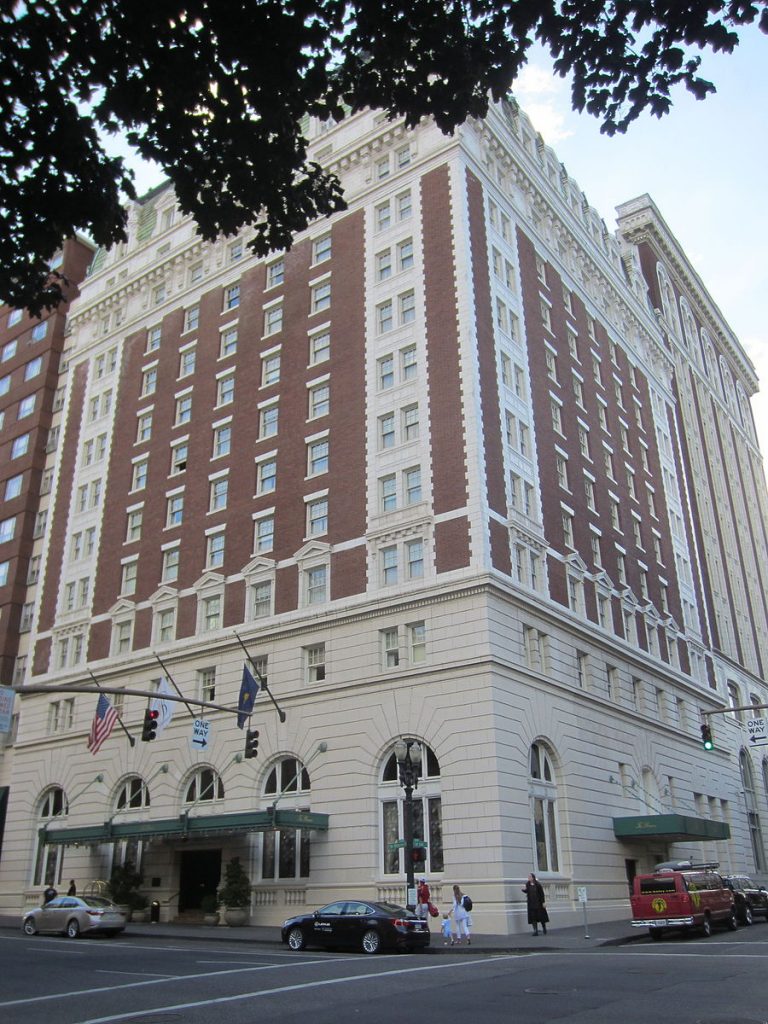 Across the street from the Benson Hotel in Portland, Oregon

The Benson Hotel is one of Portland’s most notable and historic buildings. It is not only one of Portland’s finest hotels but also the seventh largest hotel in the whole city. The hotel opened in 1913 and was originally named the Oregon Hotel. Sixteen months after the Oregon Hotel opened it began to hemorrhage money. Prompting Simon Benson, the hotels original designer, to take over management duties. Benson successfully ran the historic 287 room hotel for seven years. Benson went on to work with other hotels and decided to sell the hotel to William Boyd and Robert Keller in 1919. Today Portlanders refer to the Benson Hotel as a spooky hotspot. Visitors report seeing a little boy on the ninth floor who enjoys jumping out at guests before disappearing through nearby walls or furniture. Intuitive guests have taken to leaving small candies and treats for this ghostly child, who seems to respond sweetly to sweets. Booking a room at this haunted hotel is sure to get your heart rate up! 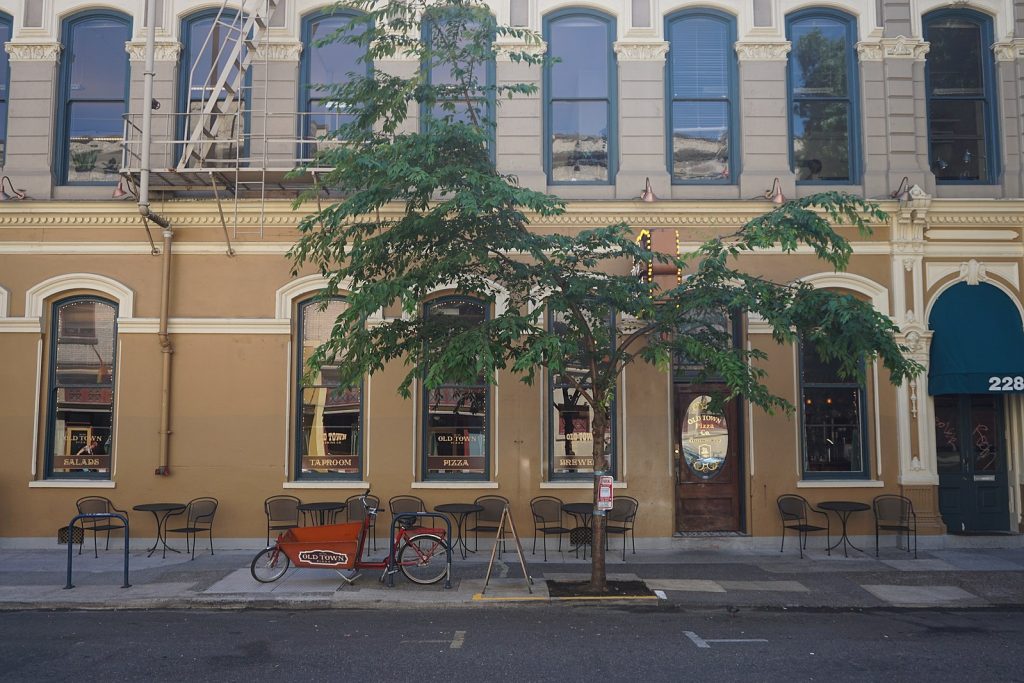 Across the street from Old Town Pizza in Portland, Oregon

Founded in 1974 by the Accuardi family this well known pizza joint is a Portlander favorite. The restaurant is inside of the Merchant Hotel, which is one of the oldest standing buildings in Portland. Three brothers, Louis, Adolph, and Theodore Nicolai, opened the hotel in the late 1800s. The brothers designed the hotel to be the definition of luxury, from the fine decor to the beautiful art lining the hallways. Being one of the only hotels to serve the upper class, the hotel operated the first hydraulic elevator in all of Portland. The Merchant hotel also housed a billiards hall, bar, brothel, and a cracker factory. A place rich in history is not without its ghosts… Visitors of Old Town Pizza report smelling a woman’s perfume, hearing whispers while they eat, and sometimes feeling a tap on their shoulder– only to turn around and find no one behind them. 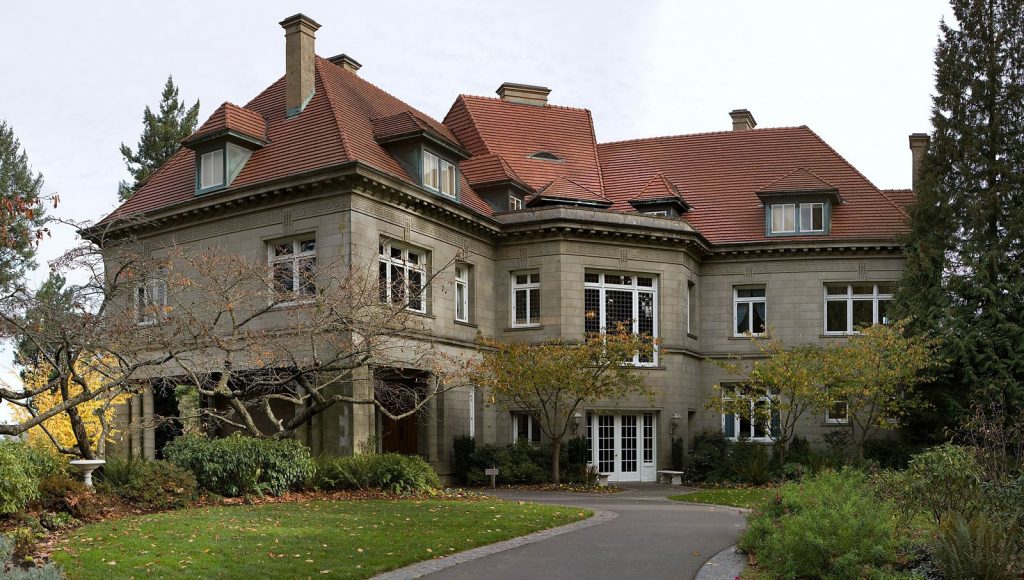 Outside the Pittock Mansion in Portland, Oregon

The Pittock Mansion, built in 1914, is a 46 room estate built as a private home for publisher Henry Pittock and Georgiana Burton Pittock in the West Hills of Portland.. It is expansive and luxurious, sitting on 46 acres that provide a beautiful view of downtown Portland. The home was more advanced than many of the homes in Portland because it featured a walk-in refrigerator, an elevator, intercoms, indirect lighting, and a central vacuum system. Don’t let the beautiful rose gardens and french architecture fool you, this mansion has a dark past. Soon after the mansion was built both Henry and Georgiana died. Visitors believe their spirits still roam the grounds. People report seeing the couples portraits moving, hearing voices, and loud footsteps when no one is around. Tour guides report seeing the ghostly figures of Henry and Georgiana floating about the rooms just before they open for business in the morning. Whether you are interested in historical buildings or spooky haunts– a tour of this mansion is sure to give you goosebumps! 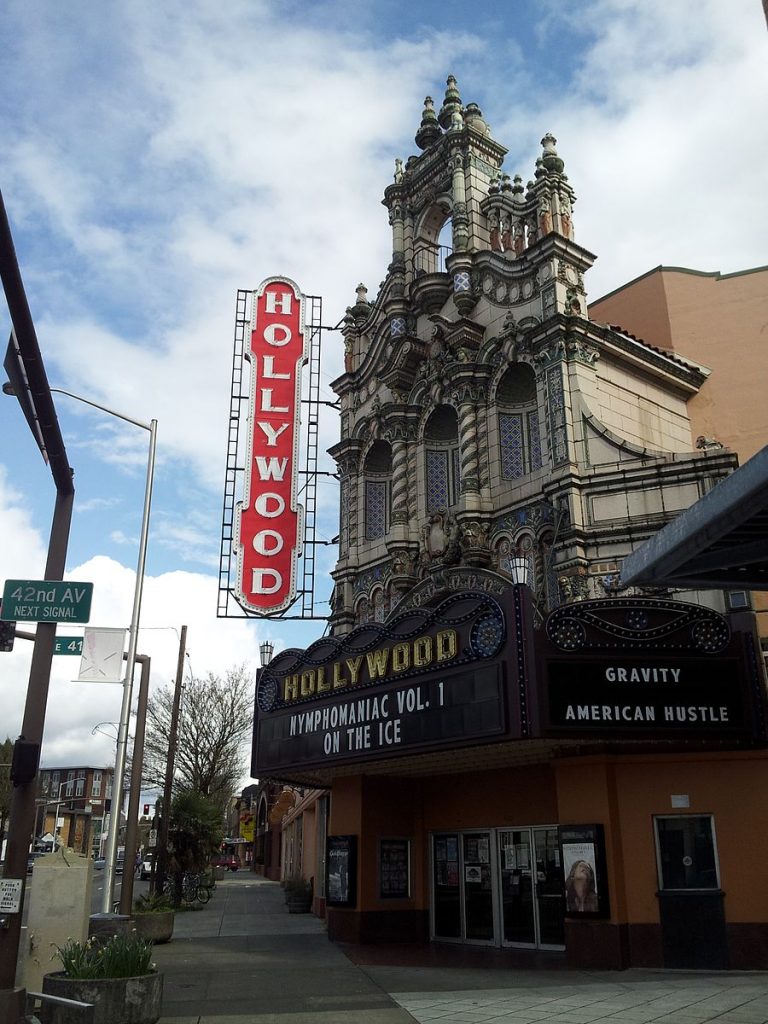 Outside the Hollywood Theatre in Portland, Oregon

The Hollywood Theatre is located in northeast Portland in the central historical part of the Hollywood district. The theatre first opened its doors on July 19th, 1926 making it one of the oldest standing movie theaters in the United States. In 1983, the theatre was placed on the National Register of Historic Places. A non profit organization currently owns the theatre and maintains the building. Today the theatre shows a wide range of movies from educational to independent and experimental films. Visitors travel from all across the United States to visit this historical theatre, not just for its films, but because it is reportedly haunted. Guests report seeing the spirit of a man floating through the audience during movie screenings. Employees who are closing up for the night report seeing a woman sitting in the back of the theatre. When they approach her to tell her it is closing time she disappears. 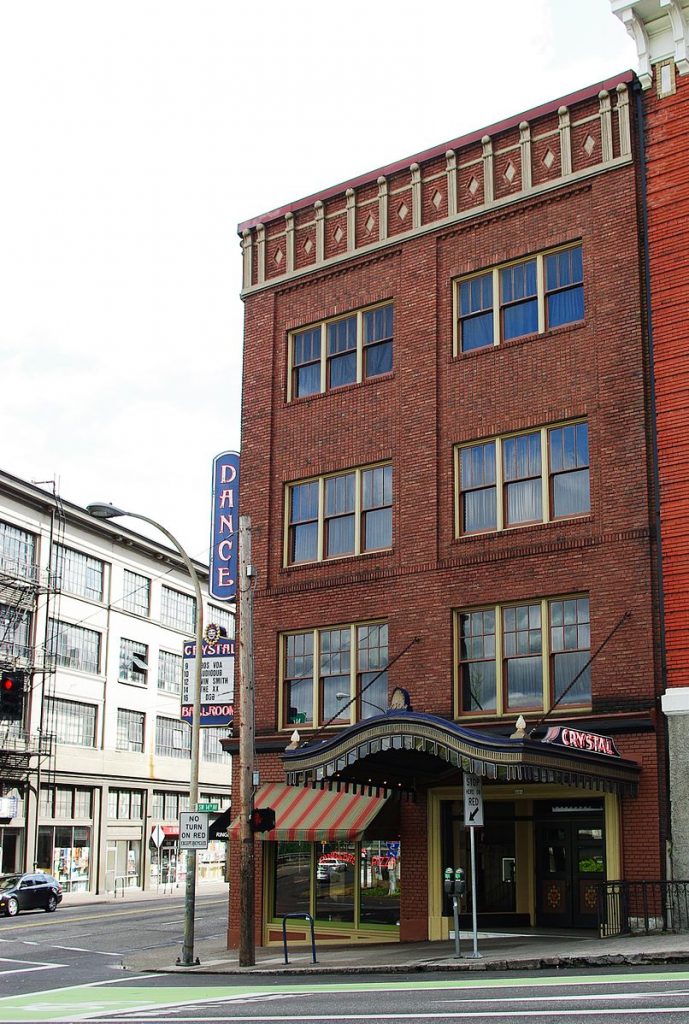 Outside the Crystal Ballroom in Portland, Oregon

The Crystal Ballroom, constructed in 1914, is the oldest music venue in the area. Very soon after its construction its owner, Montrose Rigler, sold the ballroom to Dad Watson. Rigler played mainly jazz and dance music which was heavily persecuted during that time period. Fearing for his life, Rigler had no choice but to sell. The Crystal Ballroom changed owners a handful of times before Ralph Farrier bought it. Farrier held square dances in the Crystal Ballroom through the 1950s. Eventually, in the early 1960s, interest in square dances waned and new acts were brought to the venue. R&B and psychedelic acts became very popular during this time and the ballroom began to flourish. Today, the Crystal Ballroom is a hub for music lovers of all ages and the building is considered to be a historical landmark. Most Portlanders, however, know about the strange occurrences that happen before and after business hours. Most notably, after a performer finishes their act for the night, staff report hearing shrieking voices and heavy footsteps. One staff member quit his job after witnessing the elevator going up and down on its own! 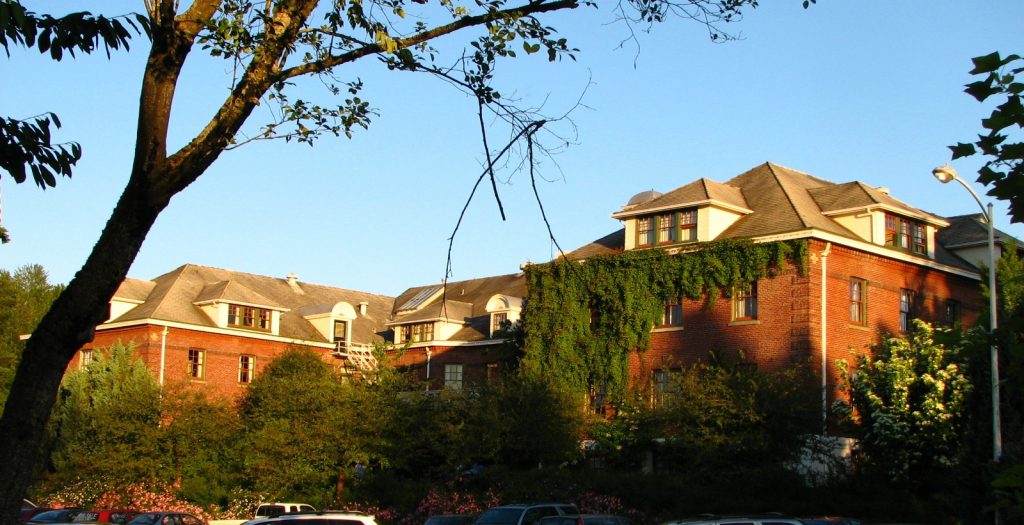 Outside the McMenamin’s Edgefield  in Portland, Oregon

McMenamin’s Edgefield, originally “The Multnomah County Poor Farm,” was constructed in 1911 to serve as a poorhouse for the impoverished people of Portland. Over the years, Edgefield was used to house the mentally ill and the disabled. Most people who entered the farm grew old and died there. Because death was so common on the farm many people were buried on the property, many of the graves were unmarked. Troubled children were also housed on the farm before it was abandoned in the 1980’s. The Multnomah County Poor Farm saw over six hundred people pass through its doors before its closure, most of which remain on the grounds to this day. The McMenamins bought the property in 1990 and reopend Edgefield manor as a restaurant, bar, and hotel. It comes as no surprise to hear that Edgefield is reportedly haunted. Hotel guests report hearing disembodied crying and whispering coming from inside their rooms at night. Others see a ghostly woman dressed in white running around the property at night. 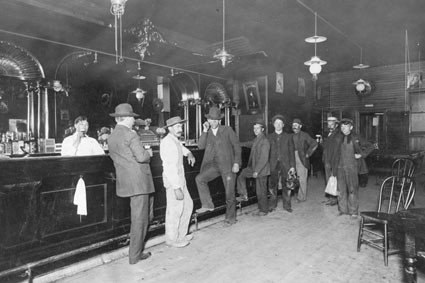 Inside the White Eagle Saloon in Portland, Oregon 1910

The White Eagle Saloon is found north of Portland’s industrial neighborhoods. The saloon dates back to 1905, when it first opened its doors for Polish laborers who worked in the industrial neighborhoods. The saloon was owned and operated by William Hryszko and Bronislaw Soboleski, who ran a respectable establishment. Once industry in the area began to boom, the saloon’s clientele began to change. Sailors from the nearby port would roll in and cause havoc. The saloon became a place people went when they were looking for trouble. The White Eagle was also a primary spot for Shanghaiers to kidnap drunken sailors, selling them off to the highest paying ship captain. Today the White Eagle Saloon is a hotel and music venue. Visitors and staff alike report daily paranormal incidents at the White Eagle Saloon, especially in the basement. It is not uncommon to hear the sound of whispers or feel the touch of a ghostly finger tip in, or around, the saloon. 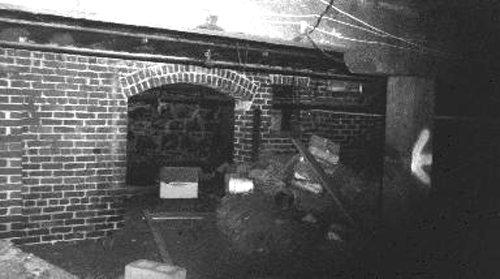 Inside the Shanghai Tunnels

The Shanghai Tunnels can be found beneath the busy streets and businesses of downtown Portland. The tunnels, constructed in the 19th century, helped to offload goods quickly and efficiently from the cities port to businesses all over Portland. Through the tunnels, the basements of taverns, bars, saloons, and hotels connected to the waterfront of the Willamette River, many of which can still be explored today. These tunnels got their name from the Shanghaiers that used them for organized crime. Sailors would come to Portland after a long voyage at sea. Many of them, tired and weary, would decide to run off leaving their captain empty handed. Eventually, ships captains began paying Shanghaiers to bring them new recruits to fill the void. It is estimated that thousands of people passed through the tunnels annually, many of them never heard from again. Today, tours explore the tunnels that are still safe to walk through. Tourists report strange voices whispering in their ears and ghostly hands grabbing hold of their clothing.

Have a look at these other spooky ghost tours around the U.S.